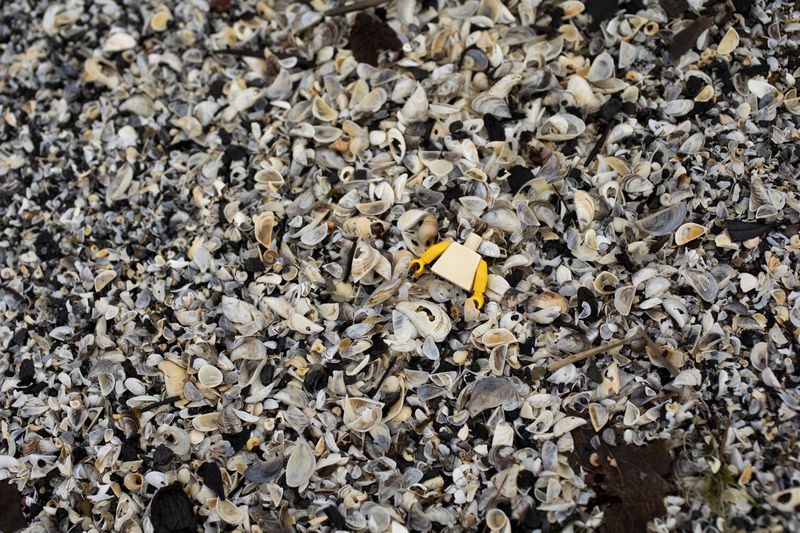 Quagga and zebra mussels shells, along with other shells and debris, clutter the dunes area at Montrose Beach on April 13, 2021, in Chicago. Both types of mussels are considered invasive species. (Erin Hooley / Chicago Tribune)

In Lake Michigan, mussels face divers ready to scrape them off rocks, molluscicides pumped underwater capable of tearing apart their digestive systems, another invasive species hungry for their young and any number of death traps researchers dream up next.

Throughout the country, scientists are studying a range of control methods to uproot invasive mussels, hoping that — like the threads that glue the mollusks down — something eventually sticks.

Zebra and quagga mussels hitched a ride into the Great Lakes from Eastern European seas three decades ago, filtering and blanketing their way across much of the freshwater haven, settling down as far away as California.

The search for solutions involves weighing the effect a treatment is likely to have on the mussels with the effect it may have on everything else in an ecosystem. Chemicals have been proven to kill mussels but can also be toxic to native mussels — many of which are already threatened or endangered. Some control methods may work for clearing mussels from a fixed structure but struggle to stand up against the unpredictability of open water. Or else end up being prohibitively expensive.

Now scientists are studying methods of genetic control — an approach that could spare other organisms from becoming collateral damage and potentially solve the scale problem.

“It could provide a way to do what we can’t do now, which is to treat an infested body of water,” said Scott Ballantyne, a biology professor at University of Wisconsin River Falls who is part of the team that started researching RNA interference and zebra mussels this year. “So that’s the hope.”

RNA can act as a translator, helping convert the information stored in a cell’s DNA into proteins essential to the body’s function. RNAi — RNA interference — can essentially block that process and “turn off” a gene.

The revelatory discovery happened by accident after a number of oddities, including an effort to make an especially vibrant petunia. Instead, scientists ended up with white petals — and an enigma.

Turns out, the scientists set off a naturally occurring regulatory mechanism using double-stranded RNA. Normally, RNA in a cell is single-stranded, but many viral genomes are double-stranded. The interference may have developed in response to these foreign appearances.

The discovery has led to treatment for a rare genetic disease in humans — and could potentially be used to treat a range of serious conditions.

“We probably know more about that little worm than any other living thing on the planet,” Ballantyne said.

The work has become personal to Ballantyne — mussels were found in the Wisconsin lake where he and his wife have a cabin.

“I thought, surely in 30-plus years of looking at these mussels, we would have better tools to manipulate their DNA,” Ballantyne said. “I was kind of aghast at how little we could do with them compared to a lot of other creatures.”

The mussels, nearly impossible to eliminate in open water, are tough to keep alive in a lab, he said.

“We struggle even now to keep them happy and healthy for a few weeks in our lab,” Ballantyne said. “In the wild they just thrive.”

Daryl Gohl, group leader of the University of Minnesota Genomics Center Innovation Lab, was among the researchers who sequenced the genome of the zebra mussel, published in 2019, and is now working on the RNAi project.

Using an RNAi strategy directly for biocontrol with zebra mussels is still a bit of a moonshot, Gohl said.

“Then there are also the political and social considerations, whether it would make sense to deploy something like this in the wild,” Gohl said.

But, with the zebra mussel genome, which includes a map and catalog of its genes, researchers can home in on genes connected to the processes that allow the mussels to spread and survive, including the formation of shells or the threads the mussels use to attach to surfaces.

“We have this list of potential targets that one could exploit to potentially enable some sort of biocontrol down the road,” Gohl said.

Genetic control strategies could also combine and supplement more traditional control approaches. Scientists are targeting genes they predict are involved in stress responses — including tolerating heat, or toxins such as copper sulfate.

Researchers could potentially engineer a food source like bacteria, or algae, which would introduce the double-stranded RNA to the mussels, Gohl said. The material could even be distributed to the mussels similarly to Zequanox engineering, which involved a frame and tarp system to pump the molluscicide underwater. For lab tests, they could directly inject the mussels.

While RNAi research is underway on zebra mussels, other scientists are considering a different approach with quagga mussels.

CRISPR is another genetic technology that is most commonly used to directly edit DNA, and can mean a permanent change passed on through generations, unlike the more indirect RNAi.

Researchers with the federal Bureau of Reclamation, which oversees water management, have a draft genome of the quagga mussel and are investigating CRISPR technology for future biocontrol.

Biologist Yale Passamaneck is working on the project and analogized sequencing the genome to “the world’s most complex jigsaw puzzle.”

Now, Passamaneck said, researchers have “a book in a foreign language and you need to be able to decipher it.”

Scientists are working on that translation dictionary.

“You can’t really think about a genetic biocontrol project with any seriousness until you have a really high quality genome — and a good annotation of it,” Passamaneck said.

Researchers are interested in targeting reproduction in the quagga mussel, Passamaneck said.

But while there’s information about the mussels’ ecology, their impacts on infrastructure and how to control them in dams, when it comes to genetic research, “there’s still a pretty big knowledge gap,” he said. For example, scientists still don’t know how sex determination happens in the mussels.

Figuring out how CRISPR could be implemented in mussels is a challenge, he said, because of how little is known about the mussels compared with many other organisms. But, if the technology could be implemented, it could solve how to control mussels in large bodies of water — an exciting prospect to scientists, Passamaneck said.

With quagga mussels, you’re “reinventing the wheel” to an extent, Passamaneck said. “You can take the whole bag of tricks that’s available, but then you have to figure out which ones work and which ones don’t.”

As for the most promising solution, Passamaneck said it may take a collection of different approaches.

“It’s going to take a lot of work by a lot of people to get there,” he said.

The UMGC Innovation Lab is a grant-funded research group led by Dr. Daryl Gohl that focuses on developing high-impact and novel technologies for genomics research with the goal to convert these research outputs into services, intellectual property, and licensing revenues. In collaboration with the Minnesota Aquatic Invasive Species Research Center (MAISRC), the group released the first sequencing and assembly of the Zebra Mussel genome, an endeavor that will have global implications in the battle against this invasive species. The Innovation Lab is currently working with MAISRC to develop methods of RNA-interference (RNAi) to identify genetic weak points in zebra mussels and to develop the tools to manipulate these critical genes as a stepping-stone towards targeted genetic biocontrol efforts.