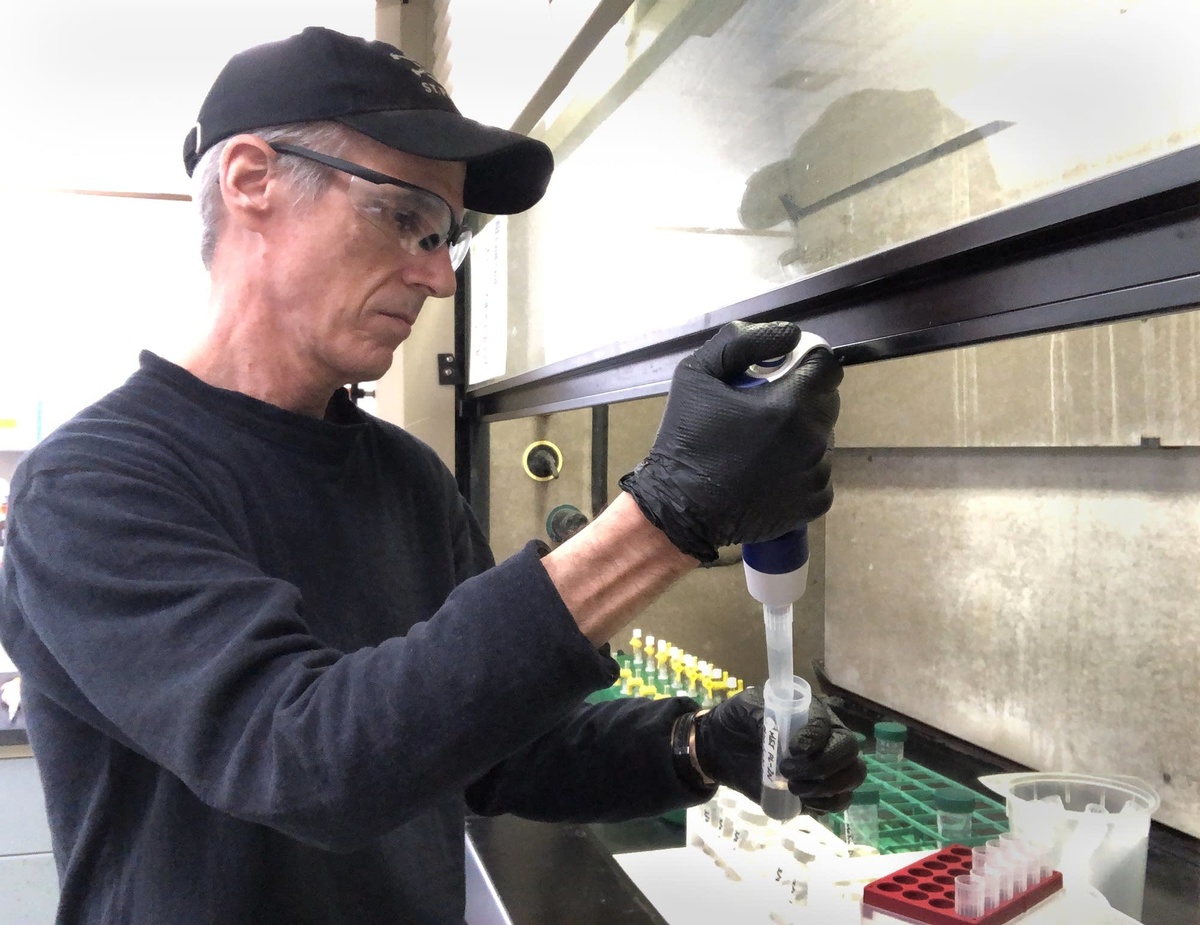 Steve Balogh, principal research scientist at the Metro Plant in St. Paul, prepares samples of wastewater in a lab in March 2012. Metropolitan Council environmental services staff extract RNA or genetic material from SARS CoV-2 from the samples, then send it to the University of Minnesota Genomics Center, where scientists measure the amount of viral RNA. Courtesy of Metropolitan Council file

Research has shown since early in the pandemic that COVID-19 virus shows up in people’s feces. All that poop flows through the sewer system to wastewater plants. And at the main wastewater plant for the Twin Cities, Met Council scientists have been taking daily samples.

When other scientists at the University of Minnesota's Genomics Center process the data, they can see how much viral material is in the metro’s collective waste.

It can sound like a stretch. But it turns out that wastewater analysis closely matches other ways to track the virus like case counts — except wastewater can actually flag spikes faster than traditional testing.

"Somewhere in the realm of 15 days ahead of time before whatever shows up in clinical cases, we're able to see that in the wastewater,” Glenn Simmons Jr., a professor at the University of Minnesota Medical School in Duluth told MPR News last year.

Scientists have been monitoring COVID levels in Twin Cities wastewater for more than a year. Now, in response to a request from MPR News, the Met Council will be releasing the data to the public every week, starting in the coming days. 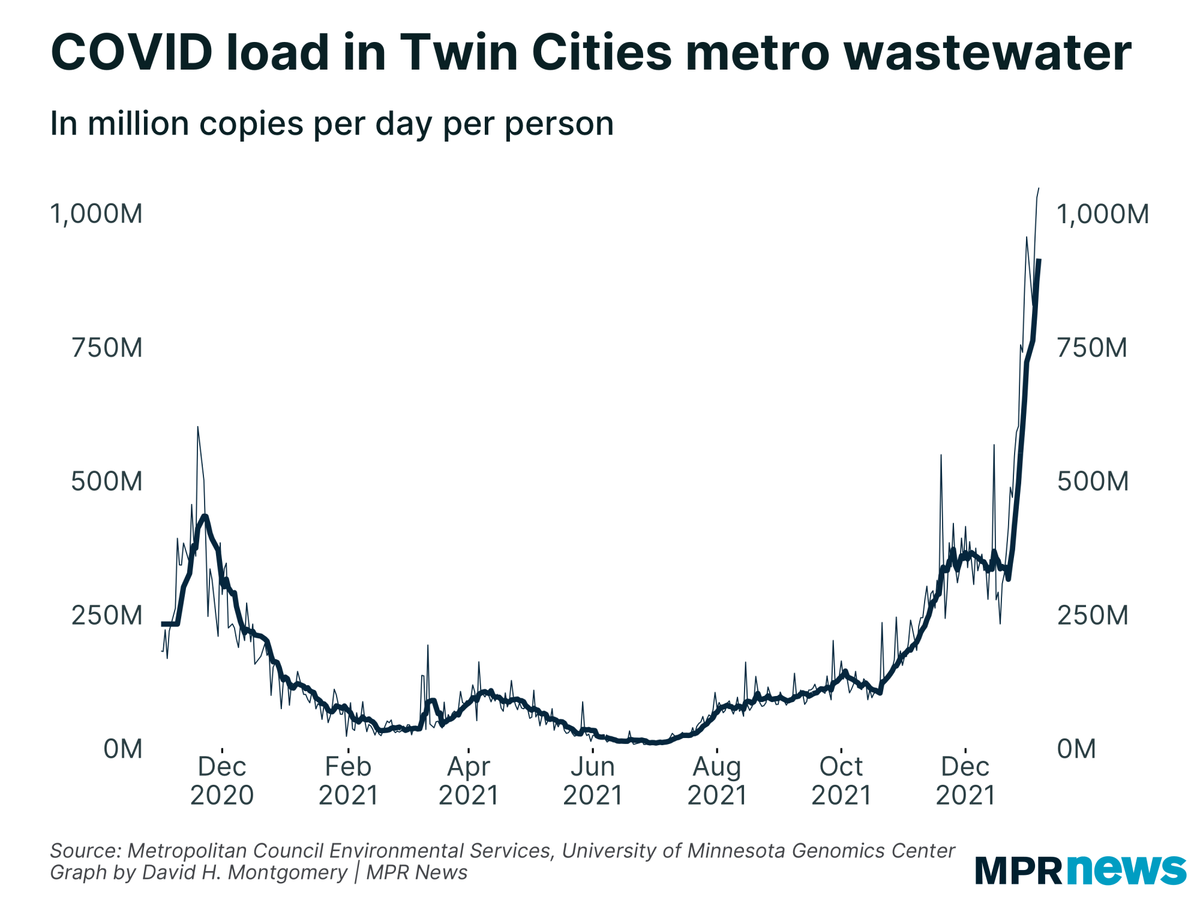 Reported case counts for the parts of the metro area covered by that wastewater plant didn’t start going up until a week later, around Dec. 28. 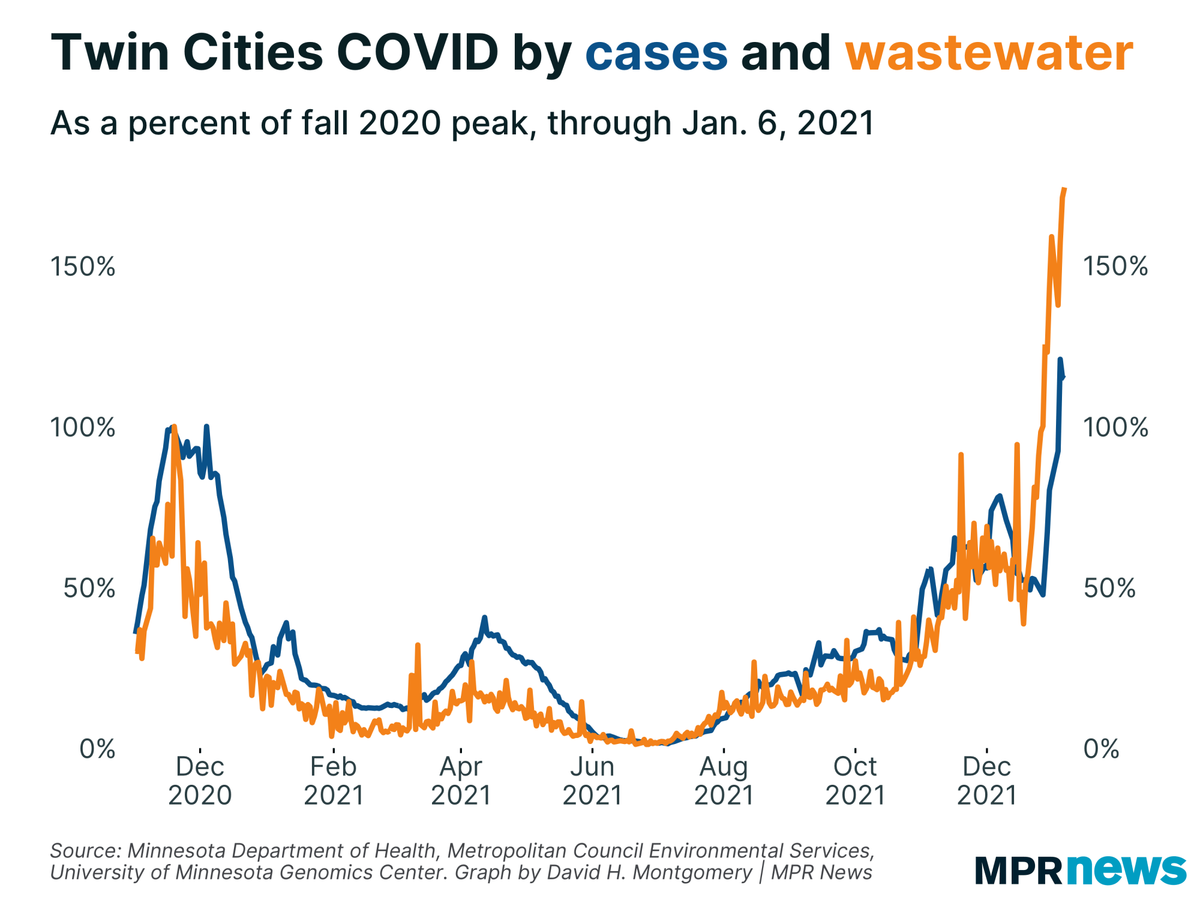 As of Jan. 6, COVID levels in Twin Cities wastewater were 70 percent higher than the fall 2020 peak. Reported cases in the metro didn’t reach that level until six days later, on Jan. 12.

Tracking COVID-19 by cases involves a number of delays. First, it can take days after a person gets exposed before they go get a test. PCR tests often take 24 to 48 hours after the sample is taken before they can be delivered to a lab and analyzed. Once that result is obtained, the lab needs to submit the data to the Minnesota Department of Health, which then needs to process the data before sharing updates every workday at 11 a.m.

For much of 2021, Minnesota averaged about three days of delay between when a sample was taken and when it was reported to the public — though some tests were processed more quickly and others more slowly. But in the first weeks of 2022, extreme testing volume coupled with COVID infecting lab personnel has combined to significantly increase this delay. In the past week Minnesota has been averaging five days of lag, the worst level since 2020. 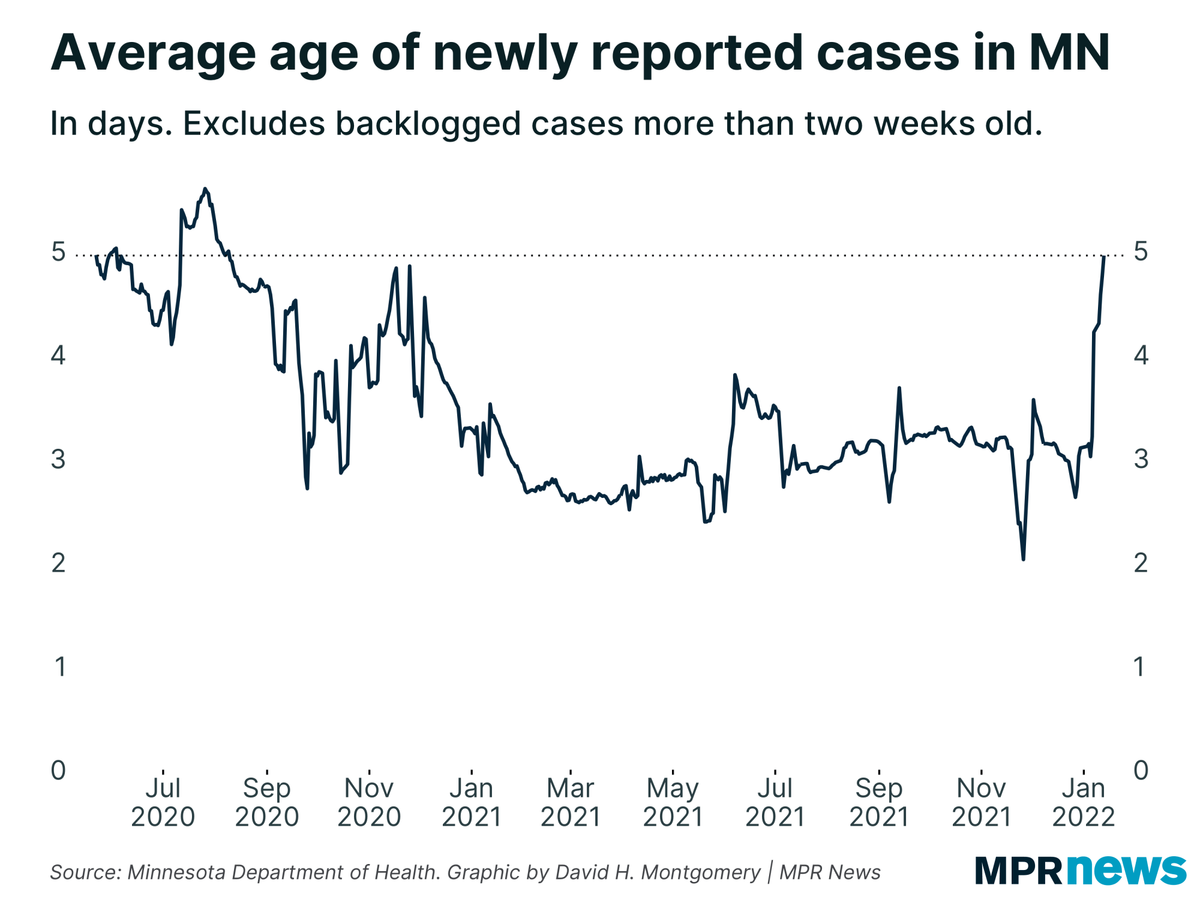 That only increases the ability of wastewater treatment to identify surges early — though the wastewater processing has its own lag time. Though the Met Council collects samples every day, they’re only delivered to the Genomics Lab for testing once per week.

The genetic analysis performed at the Genomics Lab can also identify unique markers for variants such as delta or omicron.

The Twin Cities wastewater data noted a surge in markers representing the early COVID variants — alpha, beta and gamma — beginning in the late winter of 2021, and spiking around the start of April. That coincided with Minnesota’s spring COVID-19 wave.

A few months later, the wastewater data tracked the surge of the dangerous delta variant in summer 2021. And more recently, it followed the arrival of omicron in December. 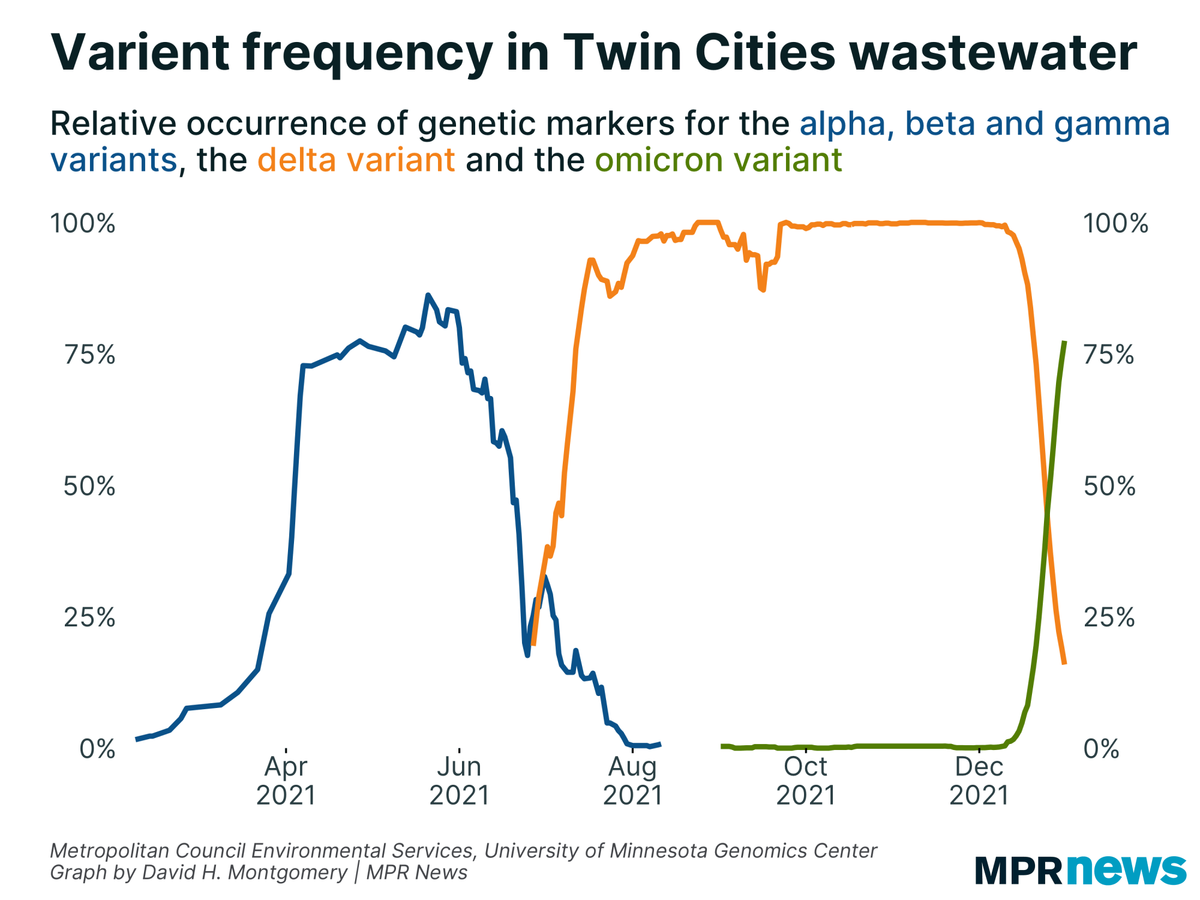 The omicron variant arrived with particular speed. Minnesota’s first confirmed omicron case was identified in a man who developed symptoms on Nov. 22 after he returned from an anime convention in New York City. But omicron didn’t take off in the metro for several weeks, weeks where the delta variant continued to be dominant.

Starting around Dec. 13, omicron markers started to show up more and more in the metro’s poop. Omicron was accounting for more than 70 percent of the sample by Dec. 30, less than three weeks later. 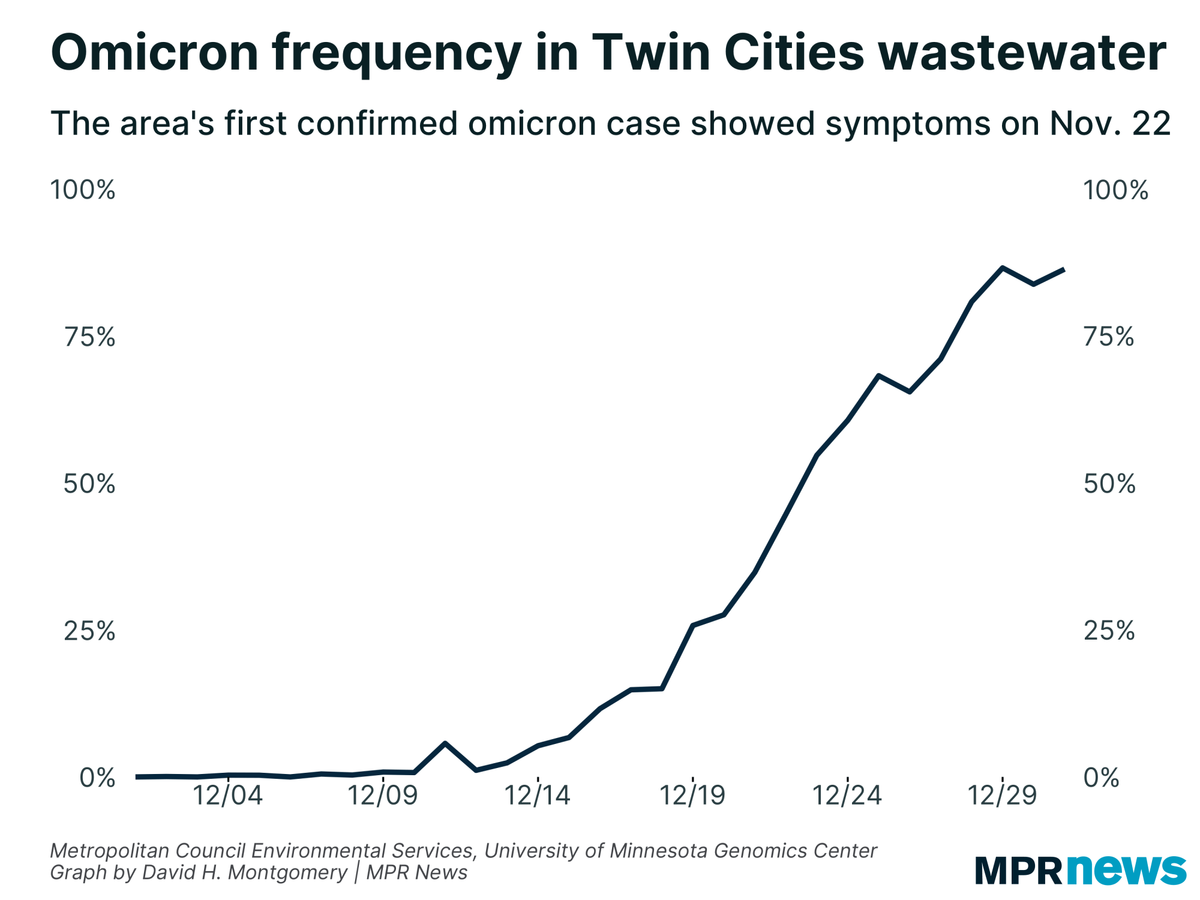 The Twin Cities metro area is served by a number of wastewater treatment plants. Currently, scientists at the Met Council and University of Minnesota’s Genomics Lab are analyzing daily samples from the metro’s primary wastewater plant, which serves Minneapolis, St. Paul and a range of inner suburbs in Hennepin, Ramsey, Anoka, Washington and Dakota counties — a total of 1.95 million people.

The daily samples are delivered to the Genomics Lab once a week. There an analysis identifies the level of COVID-19 viral material in the wastewater, and highlight unique genomic markers for variants like delta or omicron.

The Met Council plans to publish a dashboard and downloadable data in the coming days.